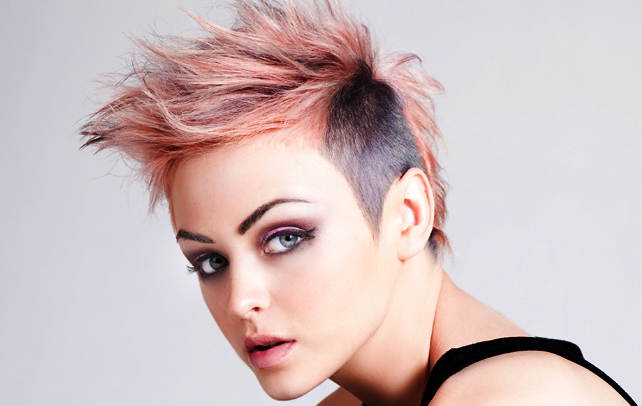 Who on the mother Earth wouldn’t like to be in limelight with every appreciating eye on him, or her? Certainly, each one of us wants to! For it is rightly said that the way you dress up, reflects your personality. It’s true that not all of us are equally conscious about the way we dress, accessorize, do makeup, or don on exciting hairstyles. But, there are many, of the adventurous kind, who like to experiment with new and trendy apparels, or flashy makeup deeds to look different. It is this lot which often opts for cool haircuts. Well, if you too are one of those happening and cool hunks or chicks then the best way to reflect your adventurous personality is to try punk hairstyles. The punk hairstyle has drawn its roots from several music scenes, cultures, sub-cultures and art movements. Beginning back in 1970’s with fun, loud and strident rock music, the hairstyle conveyed the message to rule the world; surpassing the boundaries of cut, colour and style. It still conveys the same and is a rage and goes fantastically well with odd hair colours like red, blue, orange, purple, pink, green or their combination. Browse through the next segment of the article to know more about various punk hairstyles.

Liberty Spikes
The name of the hairstyle itself speaks about its appearance: long spikes which bear a resemblance to the crown of the Statue of Liberty. Liberty spikes can be obtained by forming thick spikes pointing outwards in all directions (sometimes only in single direction, depending on individual’s style). This punk hairstyle is best suited for long hair.

Fanned
Easily amendable, fanned hairstyle is best fit for guys and girls with long straight hair. To get this cool fan-like hairstyle, shave your head from both left and right sides except the mid portion ranging from the frontline to nape. Style these long strands in the form of a fan and surprise many.

270 Degree Hawk
The hairstyle making 270 degree angle with the strands of your hair would woo the trendy pals and onlookers alike. Style your hair donning on the 270 degree hawk by cutting the hair from nape to the forehead in a straight line, forming a 270 degree angle. Extremely popular, give it a try once!

Slant Hawk
The style is known to be associated with the R&B artist Shawn Desman. The hawk is formed by styling the outgrown area of strands from the neckline to the opposite side on the forehead, diagonally. This cool hairstyle would help you look distinct from the crowd. A must try!

Chelsea Hawk
The female oriented Chelsea hawk hairstyle is indeed a combination of the Chelsea hairstyle and men’s mohawk. When you want your hair to reflect your fun-loving and adventurous side while adhering to the charming looks, try this one out. Make striking spikes of strands, keeping the fringes in front falling on the forehead.

Dread Hawk
While most of the other punk hairstyles follow upward spikes, this hairstyle makes your hair dreadlocked. You can stylize your hair as braided, tied, tucked or pulled back. The hairstyle gets highlighted with the bright neon colours as used by the members of crust punk, dub-step, and Goth subcultures, which you can also try.

Side Hawk
The hairstyle gives a very different feel with a shaved back of the head. The hair extend ear-to-ear, horizontally, which makes it distinct from many other punk hairstyles which follow vertical alignment of hair from forehead to nape. The spikes get created in upward direction, giving you a peacock effect.

Bi-Hawk & Tri-Hawk
Traditional mohawks are known to have one single central strip. Unlike the traditional one, bi-hawk has two central lines while tri-hawk has three central lines. Interestingly, apart from the shaved sides, the hair in the middle also need to be shaved for either of these hairstyles to take form. Truly a unique hairstyle!

Reverse Mohawk
This style is just the reverse of the mohawk cut where the midline has longer hair and clean sides. In this hairstyle, the mid portion of the head is shaved clean from forehead to nape while the both the sides are left unshaved. The style is also known as ‘nohawk’ or ‘hawkmo’.

Faux Hawk
This style is obtained by going for styling your hair in mohawk style but leaving the head unshaved on the sides. The style has a small appealing tip at the centre which is often smaller than traditional spikes of mohawk. David Beckham and Garret Heinrich are the names credited with its popularisation in recent times.

Mollet
The hybrid of the mohawk and mullet, a mollet, is often seen as a variant of the faux hawk. The front side of the style shows a mohawk while a mullet is created on the back side. Maynard James Keenan of Tools is the only person who carried this hairstyle with full confidence. Try it and see if you can hold the charisma of a mollet!

Glow Hawk
It is one of the most popular punk hairstyles among the trendy youth. People try a variation of dye forms and colours as per their choice to make it look trendier. To get this hair style, you only have to style your hair in Mohawk style and colour them with bright hair colours and you are there: with a glowing, striking, and stunning hairstyle.

Cross Hawk
If you are open to pushing the limits and experimenting with the mohawk style, try it! You will really enjoy styling your hair in cross hawk which is formed by the combination of conventional fanned mohawk and side-fanned mohawk. And the most popular variations of cross hawks are H-Shaped hawk known as H Hawks and A-Shaped hawks called as A Hawk. H hawks are formed by crossing of bihawk in H shape while A Hawks are created by bihawks in the back and side hawks.

Blow Hawk
A slight variant of mohawk hairstyle, it has spikes blowing in the upward direction. Try this hairdo by forming upward spikes of hair and blow dry to make them damp. Now, just bend the spikes to back end to get the stunning blow hawk.

Beaver
This style is primarily popular among athletes and sports personalities and is slightly different from the regular mohawk in the sense that it has short thick hair strips. To get this cool hairstyle, shave the sides of the head while making small thick strands in the middle portion of the head. Make sure that the strands are short and not fanned; otherwise, it would not be differentiable from a regular mohawk.

With so many different and stylized versions of hairstyles to opt for, you ought to put in just a little thought with an ounce of dare and you’ll get a cool punk hairstyle to show off to the world.