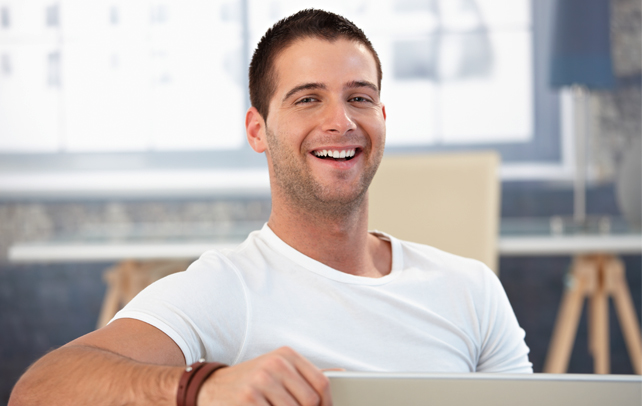 Men’s faces have been categorized into seven basic shapes viz., oval, square, oblong, heart shaped, triangular, diamond and round. Some men, who do not fall into any one particular category, normally have a combination of two or more of these facial shapes. In choosing a hairstyle, the general principle to be followed is to evaluate the type of face you have, or the one which closely resembles yours. A round face is one in which the length and width is almost the same, giving the person a soft look rather than an angular one which is usually associated with a man’s face. You can create an amazing difference in your looks by choosing the right hairstyle. However, before that it is essential that you understand what you need to do before trying to modify your looks. The idea is to make your face appear longer or oval, and not round. A good hairstylist will be able to help you by lengthening or shortening parts of your hair, through an appropriate haircut and styling. Normally, more length and volume is added to the top of the head while the sides are kept relatively short. Here are some styles for round faces.

Spiky Style
The spiky style is very popular with many celebrities sporting it. This is an ideal style for men with round faces, as the longer hair standing out on the crown of the head add an illusion of length to the face. Many variations fall under the spiky style — the faux hawk, mohawk, punk, emo, porccupine and flat top, to name a few. Some of the more elaborate examples might initially require the help of a stylist but the basic spiky style is fairly easy to create.

The general idea in this style is to make the face appear longer and narrower.

The Buzz Cut
The buzz cut is another style that makes a round face seem longer. Here, the hair is generally styled with the use of electric clippers, the buzzing sound of which gives the style its name. A combination of scissors and clippers or just scissors can also give the desired results. A straight razor is used sometimes to give texture to the hair and to give the ends, a jagged look.

Shaggy Style
The shaggy style is suitable for various face-shapes. Depending on the way the hair is cut, it can be used to camouflage the roundness of your face. The style works well with medium or long hair. It is best to avail the services of an expert hairstylist, especially the first time you try the style.

There are umpteen variations possible for men with round faces to alter their looks and become more dashing, striking and stylish. Outlandish styles, once considered taboo in respectable circles, have given way to more adventurous styles being used even on formal occasions. Just use your imagination, the possibilities are many.